As many of you already know, Captain Steve use to be a fishing guide at Flaming Gorge. Captain Steve was notorious for helping his clients catch gargantuan sized fish using his handmade Flashy Fish Lures. One of his clients, Rick Talbot, wrote about his experience with Captain Steve during a  windy trip. We would like to share what he wrote with you, our readers. Thank you Rick for sharing your story and your great photos.

“I made my first ever trip to Flaming Gorge to see if I could catch my first lake trout. Flaming Gorge is a three hour drive for me so I started out really early to get there by eight. I met up with Captain Steve of Trophy Fishing Guides and we headed out. We started out in some of the worst weather I’ve ever fished from a boat in. There were high winds and really big waves knocking us around but we managed. The weather eventually calmed some as the day went on and we also found some areas where the mountains blocked some of the wind. Captain Steve had us over fish all day but the bite was really slow. He really knows his stuff and I took a lot of notes and learned a ton about lake trout fishing. We ended up boating two lake trout and lost a third. They put up a great fight and I think it’s about as close to salt water fishing as you can get without actually doing it. The fish would make long runs ripping out line as they went. It was quite a rush. I plan to head back up with my boat to see if I can put what I learned to good use. My Uncle held the state record for lake trout until it was broken in 1988 and that record has held ever since. I was also able to do a little fishing from the shore after our trip. The rainbows are at the tail end of their spawn and there were quite a few that were still hanging out in the marina. I was able to catch a few but most of them had some kind of disease on there skin so they were not much to look at. I was told that they were safe to eat but needless to say I released everything I caught. On the plus side is that the majority of them were good sized. You could see dozens cruising the shallows. It was fun getting to sight fish and see all the action.” 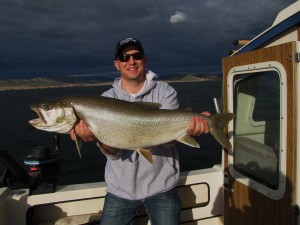 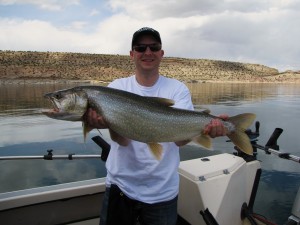 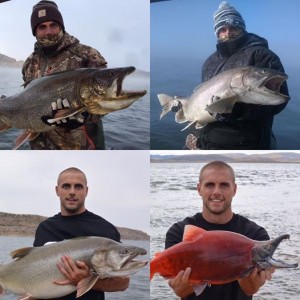 Kurt Barton wrote:
“I have fished just about every spoon on the market and have yet to find any that produce like Steve’s lures. Big lake trout eat these things like candy! I’ve had days where I caught multiple 30 pounders and dozens of fish in the 20# range on these spoons. Thanks Steve!”

If you have tried Flashy Fish Lures, you’ve probably caught a huge fish, so please email us a picture and write to let Captain Steve and our readers know what you think. info@flashyfishlures.com