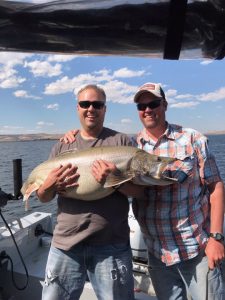 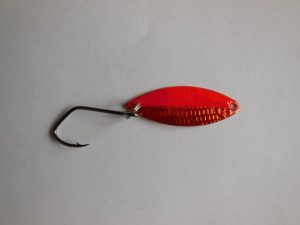 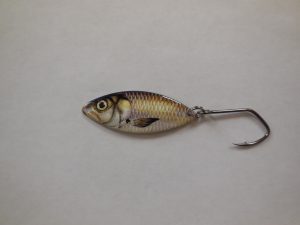 Davis tested these lures he designed for decades on Flaming Gorge Reservoir where he guided clients to lake trout as large as 50 pounds. Now, having moved to Dixie, he uses them to fetch other large species such as rainbow, brown and cutthroat trout. Where kokanee salmon can be found, in such waters as Strawberry or Flaming Gorge reservoirs, these concoctions are especially effective.

So successful are these creations made in his office vice that fishermen order them by the dozens, sometimes hundreds. These lures were put together after Davis used the standard spoons and spinners for years and decided he could improve on them. Which he feels he has done. At one time, he found himself bereft of his usual collection, took a dime from his pocket, placed a hook in it to give a slow spinning action and began immediately catching both rainbow trout and kokanee salmon. Showing it to an employee in a sporting goods store, the store began making this “lure” and attracted more and bigger trout with it.

Davis’s list of lures is a long one, but I asked him to show me his favorite half-dozen. They are Rainbow, Deer Creek Special, Strawberry Minnow, Excaliber, After-Dinner Mint and Kokanee Cookie. He has tested them in Southern Utah and found that they work on the likes of Otter Creek, Piute, Sand Hollow, and Baker reservoirs, both Enterprise reservoirs and Lake Powell or any place there are big trout or bass.

Other fish-fetching lures he makes are Silver Shiner, Copper Killer, Mac (Mackinaw) Slayer, Pink Lady, Rainbow Candy, Blue Tiger, White Belly Rainbow, Silver-Scaled Chub, White Belly Frog, Bear Lake Secret, and Super Bear Lake Secret. The latter is so secret that Davis requires those who use it to sign a pledge they will not show it to anyone. They must keep it in a paper bag until using, “Or we will not sell you one.”

He adds that if you don’t like it, “we will refund your money.” This one was field tested on Bear Lake on the Utah/Idaho border, but the inventor says he has caught fish with it on many other fishing holes as well.

Of those six favored lures, he says this: “No other lure in my box has as much ability to catch different sizes and species of fish as the After-Dinner Mint. It has a glow-in-the-dark feature which fetches attention in deep or off-color water. The White-Belly Rainbow also has this ability. Strawberry Minnow has a red side to it, especially attractive to fish in all waters with red-sided dace. (Most larger waters do.)”

Of the Deer Creek Special, Davis added, “If I was going to fish a new lake and had only one lure, I would use this one. This half silver, half gold lure is a troller’s dream come true. It works on salt as well as on freshwater fish.”

If you are a fan of large lake trout, Davis suggests the Blue Tiger.

“I have caught more lakers with this lure than any other,” he said. “You want to troll it within five feet of the bottom. Be ready for vicious strikes.”

Davis makes a good many claims for his offerings. But I have fished with him several times and found that his lures work. Naturally, the angler must fish at the right depth and be certain the lure is free of moss and hooks not tangled. (Unlike Rapalas and most plugs, Davis’s spoons and spinners do not have multiple treble hooks which can foul when trolling.)

Fashioned from thin metal, large sinkers may be necessary to get the lure down deep, but most trollers have down riggers which take care of that — and release immediately when a fish strikes.

These metal attractors are useful on streams but less so on smaller waters with smaller fish. The main attractions are to minnow-feeding large fish and almost all species must depend on fish flesh of some kind after leaving the insect-subsistence stage. In my experience, however, any trout, bass, walleye, northern pike, or other game fish will turn to minnows or other meat after reaching 11 to 12 inches. I’ve caught trout on size 3 spinners as small as eight to nine inches.

Davis loves brown trout. If he had his way, all potential trout water would be managed for Salmo trutta. Reasons: they grow big faster than other species (save lake trout which are not a trout but a char), browns are fighters and they are tolerant of warmer temperatures to 70 degrees and more.

The Division of Wildlife Resources, of course, plants mostly rainbows and cutthroat, more so the cutts because they have neared federally controlled rare and endangered status.